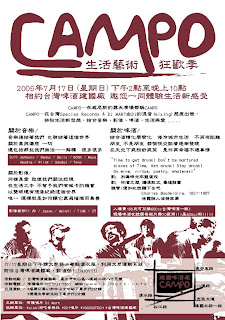 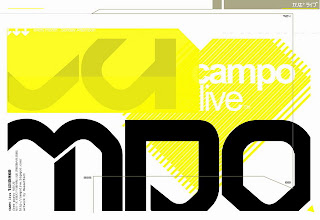 CAMPO means a small or medium plaza in Italian.

It’s also where the Renaissance started.

In 2005,CAMPO was born in Taipei Brewery.

Its original concept is DJ「mixing」.

With CAMPO a revolution of life style thus began..

Despite of the atrocious music scene ,despite of the only way of making the party culture, there are still a group of people hold on to it. They believe the beauty and power in music. They were eager to share the experience of being touched by music. So they started . In July ,2005,came the first CAMPO.From then , we heard a diversity of sounds spreading.

DJs in Species Records popped with the original idea ,then they called for those who loves music and film to join them. DjMART and DJ USED co-planned CAMPO obligately for nearly ten months. During these months ,they met problems constantly ,like budget and locations of CAMPO. But they never gave up.

In 2006，CAMPO started to shine. We always believe that as long as we have faith and as long as we try hard . Everything is possible.

Everyone ca be a DJ.If you like music ,like to share music，CAMPO’S turntables are open for you. It’s totally different from other . Over 50 DJs and 20 electronic band have performed in CAMPO. Over 20 kinds of music style were presented here. CAMPO spirit extends from north to south. From Taichung to Tainan then Kaohsiung ,CAMPO now is everywhere。Our visitors ,from 200 people before to 10,000 people plus currently. If you still don’t know what CAMPO is,come visit CAMPO. You are going to find another possibility of life.

Because of the simple thought that we want to do something for the people on the land,then we go for it and stick to it . Maybe only the people with such pure faith are able to gather the people have the same thought. Thus we create the atmosphere that nobody can achieve. Just walk into CAMPO in a warm breezing afternoon,you’ll find yourself a wonderland.